Destination Mt. Angel is a special place in Oregon that practices heritage and culture within their town. Founded in 1850 by Benjamin Cleaver, it rests just below Tapalamaho butte. Tapalamaho butte was a worshiping butte for the native Americans. Then, in 1882, a Roman Catholic Church priest arrived and staked his claim on the butte to create the Mt. Angel Abbey. This gorgeous town has kept its Bavarian and Swiss/German heritage alive and thriving with festivals such as Oktoberfest and Volksfest. This makes it worth the travel to see old European heritage still alive in the modern world.

The History of Mt. Angel

Mt. Angel began as a “mount of communion” for the native Americans. Then in 1850, Benjamin Cleaver purchased 650 acres of land, now the town of Mt. Angel. A few years later, in 1882, a group of Benedictine monks began searching for a mountain upon which they could start building an abbey.

Meanwhile, in 1881 German Catholic families began to settle in Mt. Angel and started to build on the current site of Mt. Angel. The population began to grow Mt. angel in the town it is today. 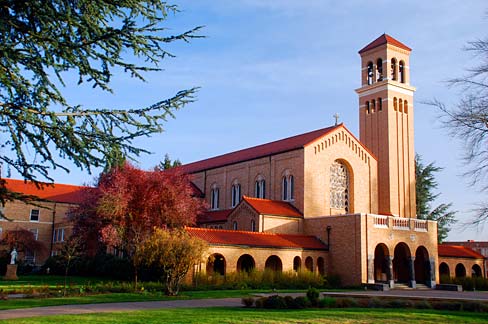 After searching throughout northwestern Oregon, roman catholic monks stumbled upon mount Tapalamaho in 1882 and began to build it. By 1884 they had completed the construction of the Abbey and sought to build schools for boys. This prompted the benedictine sisters to start their own covenant and school for girls in Gervais, a town approximately 7 miles from Mt angel. These schools helped quickly grow the town of Mt Angel and build the community it has today.

The Abbey is currently operating today, and you can walk up the butte and read the detailed history of the monks that have lived there. They offer their library to the public and can even experience monk life for a couple days, following the lead of the monks residing there. Today Mt Angel still carries on its European history with festivals, architecture, food, and beer. Their most prominent festival is, of course, Oktoberfest! Oktoberfest in Mt.Angel is said to be one of the best Oktoberfests in the country and brings in about 350,000 people for the weekend, compared to the 3,575 people that reside within the town year-round. They sell everything from lederhosen and dirndls to locally made German sausage and beer.

Other festivals such as Volksfest are less popular but still carry the tradition of their heritage. Volksfest is a town event in which they celebrate their German heritage and sausages.

The Mt. Angel Glockenspiel Stands high and mighty at the center of the town and is one of their biggest attractions throughout the year. Standing at 49 feet tall, the Glockenspiel rings its bells every 11 a.m., 1, 4, and 7 p.m. daily. People gather around during these times not only to hear the bell ringing but to see the figures dancing to the music. The first figure is a native American to honor the natives that used to worship their gods from the top of Mt. Angel. The following 5 figures are 2 German settlers, the early community leader, the founder of the benedictine monastery and the first sister, and finally, Papa Oom Pah, the representation of the town’s Oktoberfest.

To find more amazing travel destinations for you and your family check out our other destination posts for more ideas on where to go. Don’t forget when you are planning your trip to check out our RV rentals starting at just $200 a night.